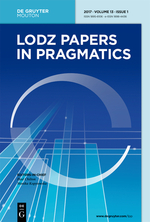 A new Wor(l)ds Lab study has been published in Lodz Papers in Pragmatics 13-2, an international journal “committed to publishing excellent theoretical and empirical research in the area of pragmatics and related disciplines focused on human communication”.

The title of our work is “The framing of Muslims on the Spanish Internet“, a study of the representation of Muslims on Internet. After the terrorist attacks in Europe (including Madrid and Barcelona), Islamophobia and Muslimophobia have grown considerably in our society. Tracking discriminatory discourses about Muslims and Islam is not easy, firstly because categorization is itself elusive: discourses mix different elements such as race, nationality, and religion when referring to Muslims. However, such a study is necessary given that political discourses, mainstream media and social media become sometimes a vehicle for hateful political beliefs, ideologies and actions.

This paper is anchored in a Cognitive linguistics approach, and especially in the Frame Semantics, where special relevance is given to lexical selection and framing strategies. In short, we followed a Corpus Assisted Discourse Studies (CADS) approach. We observe the frames through the most frequent lexical selection obtained with Corpus Linguistics tools with which we explore our data. The most frequent collocations point at the frames being constructed in the discourse. To take an example, we see that the adjective “Islamic” is frequently used with violent concepts such as “terrorism”. This indicates a conceptual contiguity between terrorism and Islam, i.e. that terrorism is part of the framing conveyed by the word islámico (‘Islamic’).

Though the social reality of Muslims in Spain is very complex (Spaniards, immigrants, tourists, refugees, etc.), the discourse on Internet is partial and shallow. As a matter of fact, even when Muslims are mentioned as belonging to a common past in Spain, they are pictured only as military invaders (“Them” as historical enemies in our territory). When it is a frame of “Them” as victims of injustice related to Islamophobia/Muslimophobia, they still are at the other end of the Us vs. Them polarization.

The research presented in this article confirms the stigmatization of this minority in the digital discourse. This also explains the fact that we have found cultural words (such as velo or jihad) semantically shifting to a negative framing. If the detection of stigmatizations is, as pointed out by experts, the first step in escalating into hate speech and hate crime, digital discourse about Muslims in Spain should be considered as worrying.

Participation in the “Preventing Radicalization” G20 Meeting of Experts in Berlin

I International Conference on Research in Multilingualism: Innovation and New Challenges